You can draw beautiful text and patterns
in calligraphy on a material by installing the
specially designed calligraphy pen into
your cutting machine.
For use with Brother ScanNCut DX machine only.

(works in a similar way to the universal pen holder
but please be aware although it looks very similar,
it is a completely different holder:

a 2mm chisel nib, the other end has a 3.5mm chisel nib.
The colours in the kit are BLUE, BLACK AND CARMINE RED.
The ink in the pens is permanent – so be careful of getting
on your clothes etc.  Also please note the ink is *not* lightfast.

One font (Italic) is supplied with the Starter Kit.
There will be two other fonts available to buy from Brother:
but it’s my guess many of the *free* calligraphy fonts from
sites such as http://www.dafont.com will work just as well,
so I highly recommend experimenting!

Brother have two calligraphy fonts available at the moment
as optional, additional purchases: Gothic and Uncial: 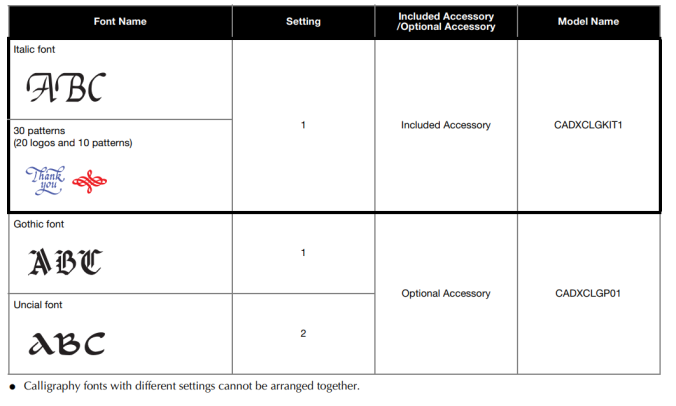 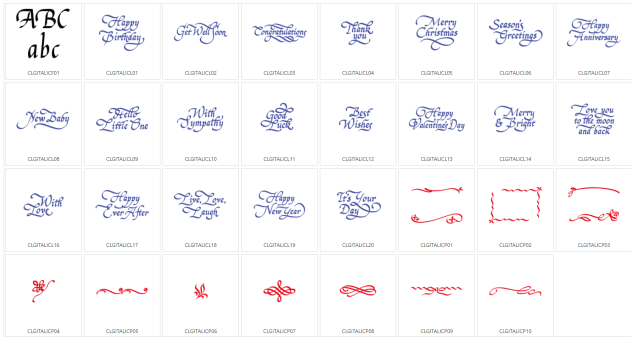 to the Kuretake Calligraphy pen:

You’ll see that apart from the branding, and colour of
the pen shell, the pens are *identical* – same shape nib,
and that both the Brother and Kuretake Calligraphy pens
have a grip at the 2mm end but no grip at the 3.5mm end.

Here is are a couple of close ups of the Kuretake Calligraphy pen ends: 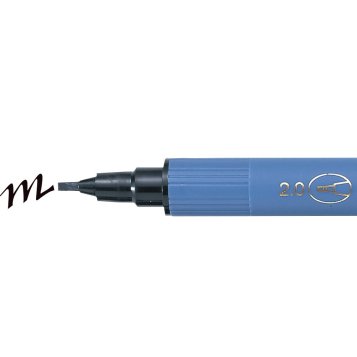 The Brother pens are manufactured on the same line
as the Kuretake pens, in the Sakura factory in Japan.

If Jo Foster from Create and Craft
(or anyone else from there for that matter)
tries to suggest anything like:

“I’ve tried these Kuetake pens and no,
they ripped the card and were very patchy,
and not good at all”.
(As she did with the Quickie Glue pens – which hilariously
are made on the exact same production line
as the Brother glue pens she was selling that were
quadruple the price of the Quickie Glue pens)
then remember she is  only interested in selling
the pens from Create and Craft as she works there
and obviously has an agenda.

Of course the Kuretake pens will rip the card and
be patchy…. if you replace the nibs with 6″ nails,
and dip the nail points in some liquid ink……. Or
take the pen caps off, and let the ink dry out……….